Impression, sunrise by Claude Monet: symbol of the impressionist movement 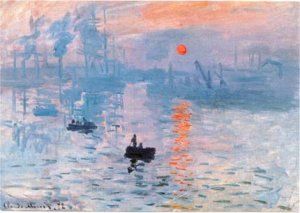 Impressionism is considered the first revolutionary art movement that echoed the abstract thinking that emerged years later. Considered the catalyst for modern art, it has played a central role in art history, its influence evident in a range of artistic practices.

The movement itself was launched by a single work of art: Claude Monet’s Impression, Sunrise. Painted in 1872, this canvas was first shown at what would become the Impressionist Exhibition in Paris in April 1874.

This iconic painting depicts Le Havre in northwestern France, Claude Monet’s hometown. He visited the city in 1872 and created a series of works depicting the harbor. The six paintings depict the harbor at dawn, day, dusk, and in the dark from different angles, some from the water itself and others from a hotel room overlooking the harbor.

This particular work depicts the harbor at sunrise, with two small boats in the foreground, the red rising sun as a focal point and clippers with tall masts in the background. In the background, there are also other misty shapes such as the smokestacks of steamers and packet boats and other masts and smokestacks silhouetted against the sky. Painted after France’s defeat in the Franco-Prussian War of 1870-71, it has been suggested by art historians that it celebrates the regeneration of the country after the war.

Art historian Paul Tucker has suggested that while Monet’s work is “a poem of light and atmosphere,” it can also be seen as “an ode to the power and beauty of a revitalized France.”

Impression, Sunrise focuses almost entirely on color and light, emphasizing the sun’s breaking light and its rippling reflections. Monet sought to perfectly capture the morning in evanescent detail, and his medley of blues and oranges portrays it accurately. A light sketch, done on location in a single sitting from a window in Monet’s hotel room, it is a departure from traditional landscape painting and classical, idealized beauty.

Monet titled the work just prior to the exhibition, in reference to his misty painting style. The exhibition took place in the studio of Nadar, a French photographer, with over 200 pieces from the Société Anonyme Coopérative des Artistes Peintres, Sculpteurs, Graveurs. While the other works were equally controversial, critics were particularly impressed with Monet’s painting, and especially with its title. Monet’s work drew a lot of scathing criticism from the public who considered it an unfinished work.

Jules Castagnary of Le Siècle wrote that “they are impressionist in that they do not render a landscape, but the sensation produced by the landscape,” adding that Impression, Sunrise takes leave of reality and enters the realm of idealism.