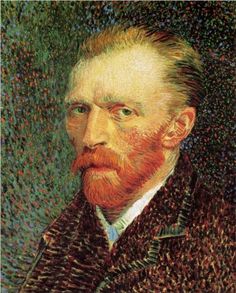 The Dutch painter Vincent Van Gogh, celebrated for his memorable landscapes of his native country, was a rather tragic figure who suffered from anxiety and depression throughout his life.

Indeed, this painting genius who committed suicide at the age of 37, was followed by more than 150 doctors who advanced a variety of diagnoses on his illness (epilepsy, bipolarity, reactive depression, limbic lesion, etc…).

A myriad of Van Gogh’s emotional states were perfectly captured in the thirty-nine self-portraits he painted between 1886 and 1889. Here is a small selection of the best known of them.

Van Gogh’s decision to paint himself was primarily due to the fact that he was often broke and therefore unable to afford models. However, looking at the contemporary situation, it seems that Van Gogh used the self-portrait as a means of expressing himself as a human and as an artist. He described his penchant for this genre in a letter he wrote to his sister Wilhelmina van Gogh in 1887: “Of my own work I think the picture of peasants eating potatoes that I made in Nuenen is after all the best I have made. But since then I have not had the chance to have models, although I have had the chance to study the question of color. And if I were to find models for my figures later on, I hope to be able to show that I am looking for something other than little green landscapes or flowers.

It can be said that for each stage of Vincent Van Gogh’s short, but very prolific career, we find a self-portrait that embodies him. It is his way of reinventing himself as he explains so well in a letter where he says “it is difficult to know oneself, but it is not easy to paint”.

The first painting on our list was done by the painter in 1889. Van Gogh took the painting with him to Auvers-sur-Oise, near Paris, and showed it to Dr. Paul Gachet, who found it absolutely fanatical. Eventually, the painter sent this self-portrait to his younger brother, the art dealer Theo, with an accompanying message: “You will have to study the painting for a while. I hope you will notice that my facial expressions have become much calmer, although my eyes have the same insecure look as before, or so it seems to me.
This 1889 Self-Portrait is in the Musée d’Orsay in Paris.

The first striking element that one notices when analyzing this self-portrait is the swirling and chaotic background. 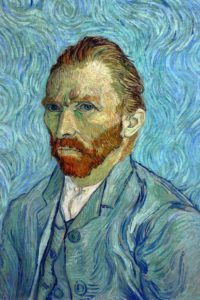 Self-portrait of Van Gogh made in 1989

For some critics, this element is highlighted on purpose by Van Gogh because it testifies to his psychotic mental state at the time he painted it. Indeed, he himself said in a letter to his sister Wilhemina, at the time of painting this self-portrait: “I was not at all aware of what I was saying or doing. Although the painting has a dark history, it shows Van Gogh’s mastery of the self-portrait and depicts a pivotal moment in his life.

We note that in this painting, Van Gogh painted himself in a blue suit, not the pea coat he used to wear while working. In addition, we can easily see that the artist wanted to focus all the attention on his face, and his eyes, which have a determined, if somewhat tired, look.

This painting by Van Gogh titled Self-Portrait with Straw Hat was painted in the summer of 1887 in Paris. It depicts the artist with an almost cheerful facial expression, suggesting the calm phase of his life. During his two-year stay in the City of Light between 1886 and 1888, under the influence of the Impressionist color palette, Van Gogh lightened his palette. However, very quickly reserved, he began to use light colors only to express particular moods.

Again, this self-portrait reveals Van Gogh’s declining health. The deep shadows, the tight mouth, etc. Many of the details included in this work show that the artist was suffering from physical stress and emotional fatigue. The firm gaze almost looks as if it is pleading for help from anyone who has seen this painting. 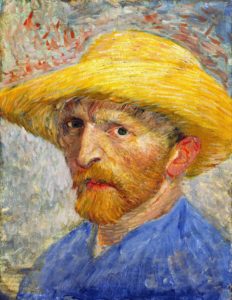 Self-portrait of the artist Van Gogh made in 1887

The yellow straw hat and the typical coat of the working class peasant, also shows the image that Van Gogh had of himself. Namely a modest artist very close to the poorest social classes.

Recent studies have shown that the Self-Portrait with the Straw Hat is not an unfinished work as was once believed. Indeed, if the painting looks somewhat dilapidated, it is due to the discoloration produced over the years.

The researchers also established that Van Gogh had painted the background and the jacket in a pink-purple color. Unfortunately, only traces of the underlying blue remain.

This self-portrait can be seen at the Detroit Institute Of Art.

This work shows Van Gogh wearing a blue cap lined with black fur and a green coat, with a bandage covering his ear. The painting is related to the difficult phase of the artist’s life. He moved from Paris to Arles hoping to establish an artists’ community to which he invited Paul Gauguin, a young Parisian painter. However, the two often quarreled and were unable to get along.

This self-portrait was painted shortly after Van Gogh returned home from the hospital after he had mutilated his ear. Again, the facial expression shows a strong melancholy.

In this work we also find several references to Japanese culture such as Mount Fuji or the two characters in traditional Japanese costume. A culture that has always inspired Van Gogh to the point of being inspired in several of his paintings.

The Self-Portrait with Bandaged Ear is in the Kunsthaus Zürich.

Self-portrait of the artist Van Gogh made in 1889