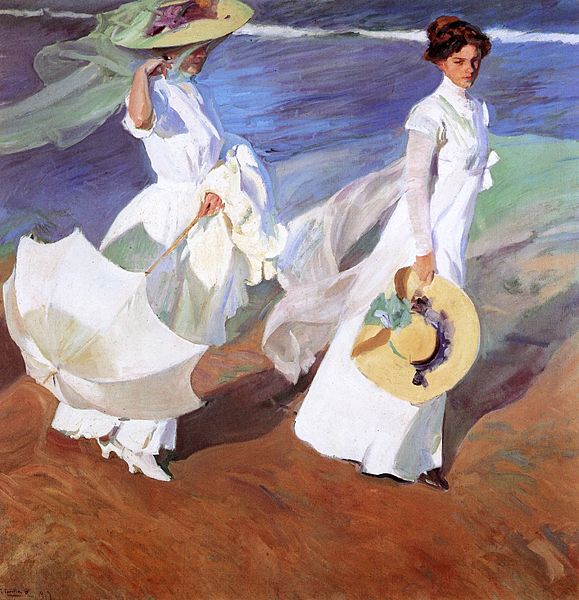 Jean-Baptiste Gouraud : Today, I would like to share with you the story of one of my favorite painters, Joaquin Sorolla.
Throughout my career, I have had quite a few artists who have influenced my work and whom I consider to be my idols. Joaquin Sorolla is very special to me because his style and technique caught my attention as my art moved from realism to a more pictorial approach.

The incredible story of Joaquin started in the southeast of Spain, he was born in Valencia on February 27, 1863. When he was only two years old, both his parents died as a result of a cholera epidemic, leaving Joaquin and his younger sister Concha orphaned.
Both child were cared for by their maternal aunt and uncle who, from an early age, recognized Sorolla’s artistic gifts and encouraged her to paint and draw.

At the age of fifteen, Sorolla entered the Valencia School of Fine Arts and became friends with Juan Antonio Garcia del Castillo. Juan’s father, Antonio Garcia, an established photographer, immediately became Sorolla’s boss and father figure during his early years. At the age of eighteen, he went to Madrid to study the painting of the former masters at the Prado Museum and at the age of twenty-two, he obtained a painting scholarship allowing him to study painting in Rome, Italy. During this period, a long residence in Paris exposed Sorolla to the naturalist painting movement, which had a profound impact on him. Artists like Jules Bastien-Lepage practiced an artistic style called naturalism that represented subjects in a more realistic way, the representation of ordinary and everyday subjects, rather than using an idealized classical composition

I have always been fascinated by French and American impressionists, such as Monet, Renoir, Berthe Morisot, Mary Cassatt and I have devoted a large part of my life to studying the work and technique of the impressionists.
But when I discovered Sorolla’s work, it was like love at first sight. I felt so inspired by his art, colours and brushstroke that I wanted to study his work further.
Although Sorolla lived during the Impressionist era, his style had little in common with the French Impressionists. His style was called Valencian luminism, a late impressionist or neo-impressionist style and was characterized by the use of large spots of color (large brush category) and light effects.
The basis of Sorolla’s exceptional technique was her talent as a draftsman and her ability to manipulate colour and value to create beauty and poetry in her painting through her brush work.
He was equally skilled at capturing the tonal and colorful essence of a subject. He devoted his life to chasing away the effects created by the sun on people, the sparkling ocean and the places of his beloved Spain. He has been such an inspiration to students and professional painters around the world.