Jean Baptiste Gouraud analyses for us the style of the Nabi : Pierre Bonnard

As in every article Jean-Baptiste Gouraud presents us an approach, a technique, a universe of a painter he is passionate about. Pierre Bonnard, he is one of the greatest colorist among modern French artists. He was born in a small town southwest of Paris in 1867, studied law at the Sorbonne from 1885 to 1888, and then turned to painting, attending the École des Beaux-Arts and the Académie Julian. With Maurice Denis, Paul Sérusier and Edouard Vuillard, Bonnard, formed the Nabis (Hebrew prophets). He was mainly inspired by the work of Paul Gauguin and then by Japanese woodcuts. For Jean Baptiste Gouraud, it is only logical when painting to be interested in such an artist, his technique and his way of projecting shapes on the canvas, the proportions and colours are just magnificent and this dazzles both the drawing lovers and the most art connoisseurs.

Bonnard’s first solo exhibition took place in Paul Durand-Ruel’s gallery in 1896, and he exhibited in the Paris Salon d’Automne from 1903 onwards. Over time, he diversified his creations by adding graphics, illustration, designer displays, furniture and scenography…etc.
His palette became lighter after the break-up of the Nabis group in 1905, on his drawings the simple street scenes of Paris were replaced by nudes, still lifes and portraits. The landscapes appeared during trips to Holland, Belgium, Great Britain, Italy, Spain and North Africa.
He finally married in 1925, his model wife and de facto spouse Marthe Boursin/de Méligny, then moved to Le Cannet in the south of France in 1926, where he made it his permanent residence.
Marthe died in 1940, and, having completed the large fresco “Saint Francis visiting the sick” in the church of Assy, Bonnard followed her on 23 January 1947.

Why do they call the Nabis

According to Jean Baptiste Gouraud, the Nabis artists may have been called so because most of them were bearded and had a rather serious approach in their works, some say they saw a kind of rabbinic approach in their work. They were influenced by Japanese prints, new and post-impressionist art such as Gauguin and Lautrec.
They emphasized the unrealistic aspects of art: reducing the third dimension to theatre apartments, and were concerned with layout and negative space. These peculiarities continued as the avant-garde entered its Fauvist, cubist and abstract phases. The group worked on several supports: oils on canvas and cardboard, tempera on canvas, decorative wall, posters, prints, book illustrations, textiles and furniture. The members went their separate ways after the break-up of the Nabis group, but generally retained some interest in their earlier preoccupations. 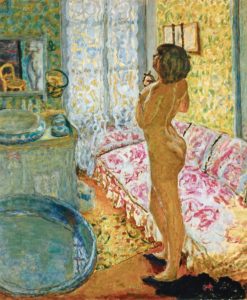 1908 Oil on canvas. Royal Museums of Fine Arts, Brussels.
In this painting the woman poses in a room almost bubbling with decoration: in the lace curtains, the wallpaper, the sofa and the carpet. Even the blue and green-blue of the washbasin and the bath in the left part of the painting have the glitter of water. There is a certain sense of discomfort on the sofa, it seems all the more difficult to install as it does not seem to be well fixed to the floor, and the perspective of the bathtub suggests that it is more hanging than standing back to see the young woman as she is presented.
This nude study has a splendid vitality, but some odd features when looked at more closely. Her left thigh has a thickening or swelling, and both feet disappear in a mist of light and rather muddy colours. His right elbow is shiny and both legs are striped in lighter and warmer colours.
Apart from the quirks, it’s also a rather academic approach and not in keeping with the joyfully naive painting of the rest of the work.
Does it all work? Bonnard has established his way of painting and will not turn away from this style to plan as it is taught in academia.
Each painting is an adventure, an attempt to make a pleasing result because the paint is applied and lets the scene take shape. Sometimes things work and sometimes they don’t, but failures can be corrected in another painting. A usual colour scheme here would be divided similarly, yellow versus reddish-pink to green-blue, but Bonnard has fresh greens in the back wall and carpet, and clearly feels they are necessary although he may have reduced them a little in the wallpaper. And he’s right. The aim was not a harmonious composition but one in which the strong female figure brings calm and solidity to the changing environment. Later, in his series “Woman in the bath”, Jean Baptiste Gouraud points out the subtlety with which the figure dissolves into a fuzz of pointillist colours.

For the painter Jean Baptiste this oil painting on canvas. From a private collection, has an imposing power of light that will fill the room with a luminous happiness, the color expresses this mood. Even the woman’s body, sensitively modelled on her back, buttocks and thighs, seems incendiary with the light, and the sun-filled drapes are left like coloured doodles on white. The shapes create interesting patterns but the depths are ambivalent: it is the clothes on the chair that give these apartments their position in the third dimension. The colour palette is divided in a similar way, yellow against pink-purple blue. The textures link the shapes together. Once again, this is a famous piece, but not without problems.
The form has largely dissolved into patterns: the sink, the clothes on the chair, and the lace curtains on the window. Only the undressed woman has some substance, although the texture and colour of the flesh is similar to that of the walls and floor. To prevent the figure from getting lost in the wall, Bonnard had to add an arbitrary outline, blue or white on the body and red on the hair. The drawing is weak. The feet do not rest well in the shoes and the woman’s left shoulder and arm has retracted into a curious muscle tube. The model is generally mistaken for Bonnard’s mistress, the youthful features being explained by Bonnard’s painting from memory, notes and photographs, but there is something disturbing in a work that does not take the trouble to fully understand the basic characteristics of a woman with whom she has lived for 40 years.
Bonnard was not a revolutionary artist, but a Nabi painter of scenes. He painted longer in this style than almost anyone else, and his best works express a warm satisfaction in the life around him. Here, however, this love of surface dazzle and texture became an end in itself, as art was no longer a celebration of the visual world, but an exercise in pictorial preoccupations. Sink, clothes and windows are very different things, in colour, texture, density, material, meaning, etc., but here they have been flattened into transparent, substance-free materials.
According to Jean Baptiste Gouraud, one might not like Bonnard, but one has to admit that his pieces are warm, intimate and colourful, if sometimes a little funny or unimportant with their interiors, dogs and domestic tranquillity. But the work could have been much better, and in general the artists of the last century and a half have not been well served by the art establishment, which first ignored their work and then praised without reservation things that were only partly good. His works symbolize all that I admire and aspire to achieve in my paintings, this kind of painters make us love painting because they have enriched it with their approaches.
Modern painting has become a collector’s item, and there is no doubt that investments would be at risk if dealers, galleries, museums and critics did not continually talk about the stock, hanging contemporary pieces of modest achievements next to the great masterpieces of the past and explaining the perceived defects or inadequacies by appealing to esoteric theory. But painting is a dialogue between the artist and the public and is probably better. Paintings are made in a way that painters understand: that is, they see what they are trying to do, how and to what extent their attempts are successful. 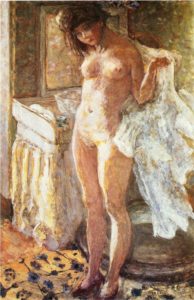