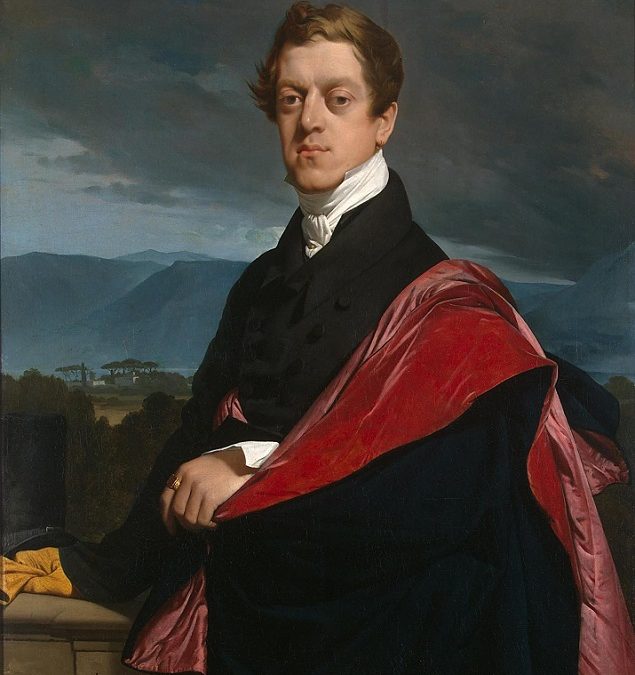 Among the painters who influenced Jean-Baptiste Gouraud, many are great classics of French painting. In this article Jean-Baptiste Gouraud tells us about an emblematic figure of neoclassical painting. Jean-August-Dominique Ingres was born Joseph Ingres in 1780 in Montauban, a miniature artist and sculptor, and eleven years later he entered the Royal Academy of Fine Arts in Toulouse, where he also played in the local orchestra. In 1797, Ingres went to Paris, where he attended David’s studio and won the Prix de Rome in 1801. To help support himself, he paints portraits of visiting celebrities, nowadays much appreciated miracles. From this first stay in Rome were also born paintings that were not well received:

Ingres stayed in Italy, first in Rome (1806-1820), then in Florence, to study Renaissance work and art history. Realizing some of his most famous portraits:
Mrs. Duvauçay, Joseph-Antoine Moltedo, Charles-Joseph-Laurent Cordier and Comte Nikolay Gouriev.

In 1813, he married Madeleine Chapelle, a milliner from Guéret, the beginning of a long and happy marriage, and the following year, he painted “La Grande Odalisque”, a painting commissioned by the Queen of Naples Caroline Murat and exhibited at the Salon de Paris in 1819. Three years later, Ingres returned to Paris and obtained official recognition with his painting “Le Vœu de Louis XIII”. He was elected to the Academy and received the order of honour.

In Italy, Rome (1835-1841) where he returned in 1835 as director of the Académie française des Beaux-Arts in Italy. This role prompted him to engage in neoclassicism, he became the champion of neoclassicism, he painted monumental canvases that Ingres himself considered his greatest achievements but which may seem to some today to be little grand or lifeless: “Apotheosis of Homer” (1827) and “The Martyrdom of Saint Symphorien” (1834). Ingres was fascinated by women and men. In 1852 at the death of his first wife, at the age of 61 he married Delphine Ramel, aged twenty, he died a few years later in 1867 of pneumonia.

The famous painting of the Bather of Valpinçon

The painting dates from Ingres’ first stay in Rome and has established it as one of his greatest works, although controversial. Ingres added a new form to the most common drawing method of European culture of the time. The naked woman, this painting that Ingres would paint and to which he would return many times later. The swimmer is a chaste portrait, of femininity, or perhaps we should say a very fine image of sensuality, where the painter’s brush has caressed a shape that, through the back, shoulders and upper arms, is of a convincing, heavy and exciting warmth.
This sensitivity for detail in the relief is also demonstrated in the curtains and bedspreads, Ingres indulges in her favourite game of showing large stretches of canvas where nothing happens interspersed with meticulously observed details: the turban, the sheet wrapped around the bathtub’s left arm, and the decoration in the drapery. Water flows in the bathtub seen at the bottom left of the table. Ingres highlighted the rounded contours of the body, by making the right arm a continuous curve, he emphasizes the muscles of the upper right arm.
The assurance and calm that appear in the painting are complemented by sharp folds: in the hanging of the curtains, the folds of the bedspread that disappear into the slits of the buttocks. Crossed legs.
Ingres’ approach was better appreciated towards the end of his life, when neoclassicism collapsed. His paintings are an ode to romanticism, to the beauty of women’s and men’s bodies and to everyday life. These achievements have become a reference for many painters.