Hugues Lallemand, the life and work of the sculptor 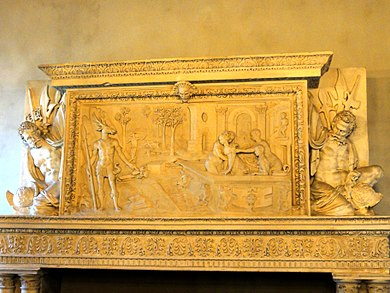 French sculptor born before 1520, Hugues Lallemand, also called Huguet or sometimes Hugues Lallemant, lived all his life in Châlons-en-Champagne where he died in 1570. This particularly prolific sixteenth century French sculptor is the author of the wooden panels of one of the doors of the church of Châlons-sur-Marne, but also of the magnificent fireplaces of the current museum of Cluny and of the castle of Ecouen. A look back at the life and work of Hugues Lallemand. 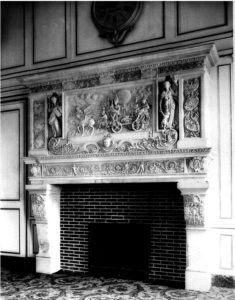 Known as Huguet, Hugues Lallemand was born in 1520 in Châlons-en-Champagne, where he lived until his death in 1570. He was the son of a master tanner, a position that was considered bourgeois at the time, as tanning was the leading industry in Châlons. To this day, we cannot say with certainty the dates of birth and death of Hugues Lallemand. According to Amédée Lhote and Louis Grignon, the French sculptor lived from 1530 to 1570, but for Stanislas Lami, Hugues Lallemand was born well before 1520, reporting that the sculptor was already executing, in 1535, the stone pulpit of the Augustinian convent in Châlons in collaboration with Simon Avrigny and Jean Lecomte. It is difficult, under these conditions, to determine the exact date of birth of the artist. But one thing is certain, Hugues Lallemand definitely marked his time with works that are still admirable today.

Hugues Lallemand, a sculptor who deserves to be better known

The artistic production of Hugues Lallemand is strongly representative of the codes of the ancient myths, in particular nudity, chastity, passion and hunting. His talent as a sculptor is undeniable, as evidenced by the many works that can be admired today, including the splendid fireplace in the Château d’Ecouen. This monumental fireplace was inspired, according to Luca Penni, by an engraving by Jean Mignon, representing Diana surprised in the bath by Actaeon, whom she punishes by transforming him into a stag and having him eaten by her own dogs. Let’s analyze the work in high relief. Daughter of Leto and Jupiter, Diana is also the sister of Apollo. Actaeon, on the other hand, is a heroic figure, raised in the cult of hunting by Chiron the centaur. Practicing his favorite activity, hunting, Actaeon surprises Diana taking her bath in the woods. Shocked, she transformed him into a stag. Not recognizing him anymore, Actaeon’s dogs ferociously devour their unfortunate master. 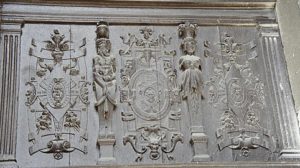 It is impossible to talk about Hugues Lallemand‘s work without mentioning another monumental fireplace created by the artist and sculptor, which now sits in the Cluny Museum. According to the results of the various researches carried out on the sculpture, the chimney signed Hugues Lallemand was formerly part of the private house of Gabrielle d’Estrées. A favorite concubine of Henry IV, she was nicknamed “the beautiful Gabrielle”. Like the fireplace of the castle of Ecouen, it is a work of high relief, measuring 4 meters high and 3.70 meters wide. It shows Christ at the fountain, surrounded by genies and trophies of arms.

Finally, let us recall that Hugues Lallemand is the author of the wood carvings of the two leaves of the side door of the church of Notre-Dame de Châlons, which nicely represent the four seasons.

We told you that the monumental fireplace of the house of “la belle Gabrielle”, currently exhibited at the Cluny Museum, is attributed to Hugues Lallemand. Today destroyed, the house of the favorite of Henri IV was located in Châlons, n° 32, rue de Vaux, in front of the apse of the collegiate church Notre-Dame-en-Vaux. This hypothesis was however contradicted by the account of Louis Grignon, “Topographie historique de la ville de Châlons”. Louis Grignon underlines that the house of “la belle Gabrielle” belonged to Jean Lallement. He also notes some appearances which indicate that this house is the one where two high sculpted chimneys existed. One of them bore the name of Hugues Lallemand and the date 1562. 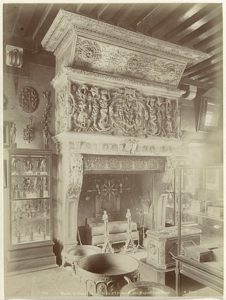 For his part, François Waldruche de Montremy claims to have found a baptismal act of 1563 in the parish archives, where the godfather is designated “Noble man Hugues Lallemand gnal”, an abbreviation interpreted by him as meaning “treasurer general of finances”. François Waldruche de Montremy also recalls that the house in question and the church of Notre-Dame-en-Vaux are separated by only a few meters. Specifically, de Montremy hypothesizes that the inscription found is not the signature of the artist, but rather the designation of the owner, who is anything but a sculptor! He thus calls into question what is known about the life and work of Hugues Lallemand before 1920. That said, it is worth emphasizing here that, by François Waldruche de Montremy’s own admission, his hypothesis is not based on any proven fact, and that he is reasoning in the “uncertainty of the a priori”.